The lines to ask a question of Amma [Mother] were longer than we could take advantage of this year, but my wife, D’Arcy, did get a chance to ask Swamini, Amma’s personal assistant, what Amma had to say about 2012 and this is the response she received.

It’s interesting because I’ve asked Archangel Michael in a reading why so few enlightened masters acknowledge the special character of 2012 and the imminence of Ascension. And he replied that their mission was different and that they wished to see their followers reach full enlightenment. He added that if a devotee of a sage reached full enlightenment that would be a more advanced goal than Ascension to the Fifth Dimension so no wonder they wished to remain with their own practices and pursuits.

Swamini said that Amma teaches that 2012 is the end of the Kali Yuga (Dark Ages) and the advent of the Sat Yuga (Age of Truth or Golden Age), She said that we may encounter difficulties in this year, especially financial problems as some structures disintegrate, but that people following a spiritual path will not be affected as much as those who do not.

She said that she does not go into these matters as much as others do because she wishes her devotees to keep their attention on what is happening here and now. And, and let me switch over now to my own voice, and say that what is happening here and now for Amma’s devotees is that they maintain a huge structure of humanitarian projects from hospitals to orphanages to schools to disaster relief. Even Amma has realized a drop in income to these programs which support widows, orphans, disaster victims and many others in need.

So Amma’s circle of devotees, which is huge, are here to see that people in need are supported at this time as the Kali Yuga winds up and the New Age begins. But Amma does recognize the events that are happening around us. 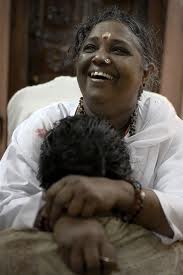